Living as in the Emperors Times

The “White Castle by the Sea” in Glücksburg by Flensburg Fjord can look back on an eventful 150-year history. The rich history of the house gives it a unique atmosphere and a special flair, which guests can once again enjoy after an extensive renovation, bringing it back to its former glory as it was back in the emperor’s time 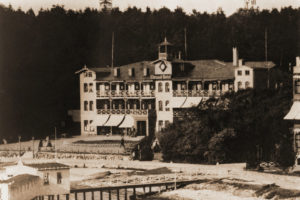 The “Strandhotel Glücksburg” was built in 1872 in the heyday of spa architecture – and high society guests were soon staying there.

Dr Christian Schmid, a doctor in Glücksburg since 1871, became aware of several articles written by Dr Mesinga, a colleague in Flensburg. In these articles the latter extolled the beach and the beauty of the surroundings of Sandwig Bay. Contact was made and the “Aktiengesellschaft des Ostseebades Glücksburg” was established. A further 80 shareholders were soon found for this company. The Baltic resort company quickly decided to build a hotel at Sandwig beach and called it “Curhaus”. As a result of a storm surge in November 1872 so much sand had been driven into Sandwig Bay that a natural beach with fine sand was created. Duke Charles laid the foundation stone on 8 May 1872. The official opening took place 55 days later.

The “Curhaus” had six guest rooms which were intended primarily for older guests. Many large parties were organised, which were at first held in a tent. It was recognised at the end of 1872 already that expansion of the hotel was inevitable. The extended building was opened on 12 July 1873 under the name of “Strandhotel”. The hotel now had two floors, 27 rooms with a balcony, a hall, a bathhouse and 28 bathing carts. Only two years later, in 1875, the hotel was enlarged again. The hotel now had 70 rooms, several salons and a ballroom.

At that time, about 350 guests stayed the night in the summer. The season only comprised the summer months, but the guests remained for several weeks in some cases. They arrived primarily by steamer. The temporary jetty, which was located directly in front of the hotel, was converted into a permanent pier. One of the first ships to dock was the “Seeadler”.

There was an onrush of guests to the hotel due to this development. Towards the end of the 19th century it became a central arrival point in Glücksburg. By ship, by train and later by car people from all over the world as well as from Flensburg arrived at the weekends. Improved transport links were responsible for this development. 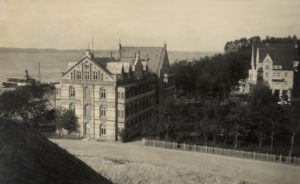 A local railway was established from Flensburg to Kappeln in 1885/86. On the water shipping traffic had been developing briskly since 1866, which was initiated by Friedrich Mommsen Bruhn with the first “Kleine Seemöwe” (small seagull). Steamers operated regularly on the fjord.

The “Strandhotel” was extremely popular among Flensburg society and with travellers from all over the world. Prominent sailors were frequent guests, e.g. Alfred Krupp loved it a lot, who came to sail on the fjord. Never to be forgotten is the visit of Kaiser Wilhelm II with his wife Auguste Viktoria, who, in 1890, docked their yacht “Hohenzollern” in front of the then relatively new and magnificent building with its distinctive gables. In their honour the legendary Kaiser menu consisting of twelve courses and ten wines was served, which is still prepared today. The imperial couple often came to Glücksburg in the following years and the townspeople enjoyed the court hustle and bustle. 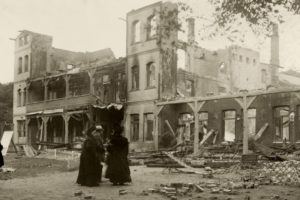 Destruction, rebuilding and use as a convalescent home

The imperial high point was followed by disaster: A fire destroyed most of the hotel in 1912. A year later, on 1 August 1913, the foundation stone was laid for a new building. It contained 45 guest rooms, some with bath and WC, on the upper floor the residential area for the family running the hotel and staff, and a ballroom. The hotel was reopened on 26 May 1914 after ten months of construction work and was now called “Kurhotel” (spa hotel). Five years later it again received famous guests. The author, Thomas Mann, and his publisher, Samuel Fischer, enjoyed the summer freshness here far from the large cities of Munich and Berlin. 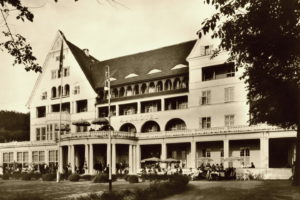 After overcoming voting consequences , inflation as well as the global economic crisis (1929) the number of guests increased again in the Thirties, but only for a short period of time. With the outbreak of the Second World War the hotel management had increasingly less influence. The large spa hotel, still owned by Kristen Skriver, was reconfigured as a military hospital as was the St. Ansgar children’s home. It is said that during the last years of the war up to 220 refugees and displaced persons for whom there was otherwise no accommodation lived at the “Strandhotel” (at the time 2,700 refugees and displaced persons lived in the town).

In 1948 the mayor, von Hassel, was successful in providing suitable accommodation for the refugees so that rooms in the hotel became again available for spa operations. At the same time the hotel was a children’s sanatorium of the regional insurance office of Schleswig-Holstein until the end of September 1950. It cared mainly for children with hilar adenopathy in tuberculosis, a well-known children’s disease at that time.

In 1951 the town had to renovate the hotel which had now been cleared of all occupants and was extremely dilapidated within the options available at that time. Changing tenants, the dilapidated state of the hotel and financial misery of people after the war, who could no longer afford to go on holiday, did not make the relaunch easy. However, the then provost, Kai Uwe von Hasse, was successful in selling the hotel to the Alt-Hamburg parish in October 1952 for 88,000 Marks.

There were long drawn-out negotiations over the use of the building by the parish. One option was a children’s home for children suffering from asthma. Several rooms were reconfigured in the building so that 90 beds were available plus 31 beds under the roof for youth camps. The building was now called the “Mathias Claudius Heim”. The former “Strandhotel” served as a mother and child health retreat of the evangelical church.
The building including the freehold was sold to Albrecht Vermögensverwaltung Gesellschaft (AVW) Buxtehude for four million Marks in 1997. 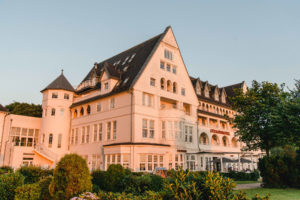 Modern hotel with a historical ambience

In 2000 the building was returned to its original purpose. Following extensive modernisation and expansion it was reopened as the “Strandhotel Glücksburg – the White Castle by the Sea”. The finishing touches were made to the hotel six years later and the result of the renovations is a combination of modern, elegant interior design and a historical ambience. The guests feel as if they have been transported back to the days of the German emperor when attractive spa hotels began to shape the image of the Baltic Sea coast. 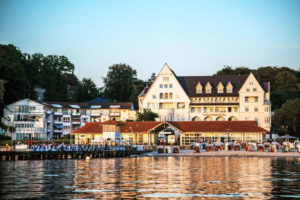 In 2006 the “White Castle by the Sea” underwent an extensive renovation as the attic floor was converted into hotel rooms. Additional rooms, an exclusive spa area and a large outside terrace were harmoniously integrated with the large ballroom. The entire lower floor was also reconfigured, and the “Felix” restaurant was established. In the course of the extensive renovations modern design was merged with the historical pride from the days of the German emperor when the hotel was still the “Pearl of the Baltic Sea”. Our guests value both eras and feel at home here. 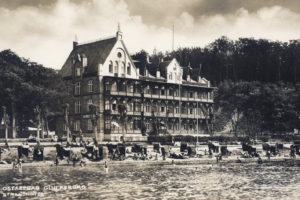 In 2008 both the pier and the Sandwig beach bistro were acquired by Strandhotel Glücksburg. 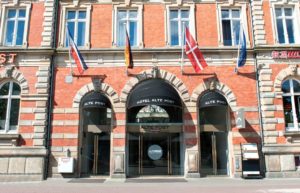 The “Strandhotel Glücksburg” opened the partner hotel “Alte Post” in Flensburg in February 2015 under joint direction and management. 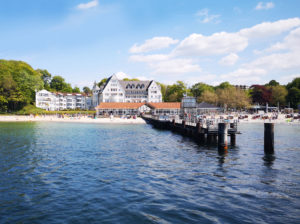 In January 2017 the Flensburg fjord was hit by a storm surge, which unfortunately destroyed the wooden bridge. A new bridge made of steel and cement was built to withstand the forces of nature and last into the next decades. 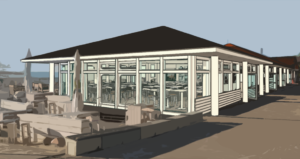 In 2020, the Sandwig Strandbistro was renovated. The restaurant area was expanded from 66 m^2 to 141 m^2 and 60 new seating areas on the 200 m^2 terrace was created on a new waterfront balcony where guests can enjoy the beautiful surroundings and the breathtaking views of the beach and the fjord.